In a project with Sarah Bush (Yale), we explore gender differences in citizens' attitudes about climate change. From existing cross-national survey data, we find that gender differences in attitudes towards climate change are highly correlated with national wealth. As countries become wealthier, women are more likely than men to express concerns about our changing climate. To explain this pattern, we present a new theory about the perceived costs and benefits of climate mitigation policy. At the country level, the perceived benefits of mitigation tend to decrease with economic development, while the perceived costs increase. At the individual level, the perceived costs of mitigation tend to increase with economic development for men more than for women. We use data from an original ten-country survey and a series of focus groups across multiple countries to support key implications of this theory. With support from the National Science Foundation (SES #2149224), we are collecting new data on how and when climate change becomes politicized and whether messages developed by political parties to resist climate action tend to resonate more strongly with men or women.

The article that describes the project's puzzle, theory, and initial results can be found here. See coverage by The Economist here.
​ 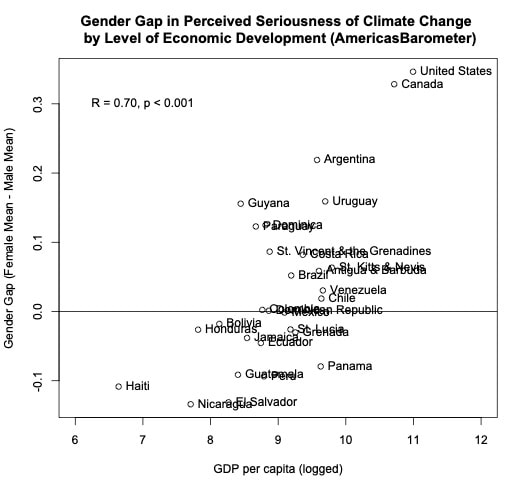 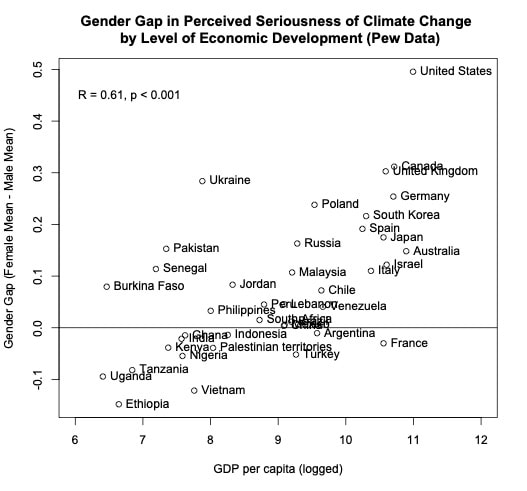 Figure 1: The gender gap in climate concern by country is highly correlated with economic development. Data are from the AmericasBarometer (left panel) and Pew (right panel), with climate concern standardized so that the mean value is 0 and the standard deviation is 1. Country wealth (x-axis) measured by logged GDP per capita.